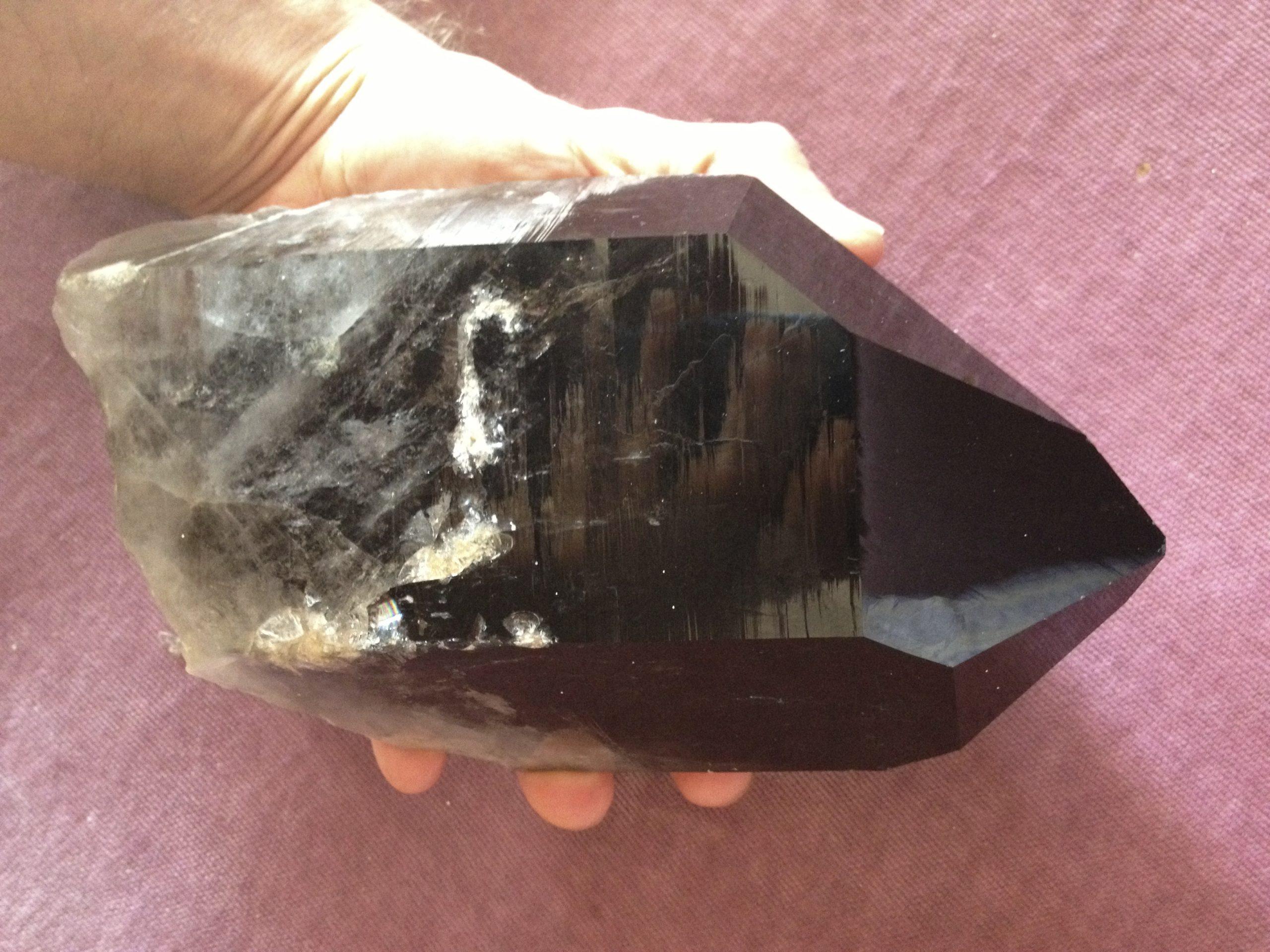 Protection. You want it. I want it! Who doesn't? But what is it...what does it really mean? That word - and the actions required to achieve that thing called "protection" - what's it all about? I hear a steady hum of requests and claims from people who are seeking, using, even?needing Crystals for this purpose. "Do this" or "carry that" - I've heard - and (essentially...people claim): "you're all set." 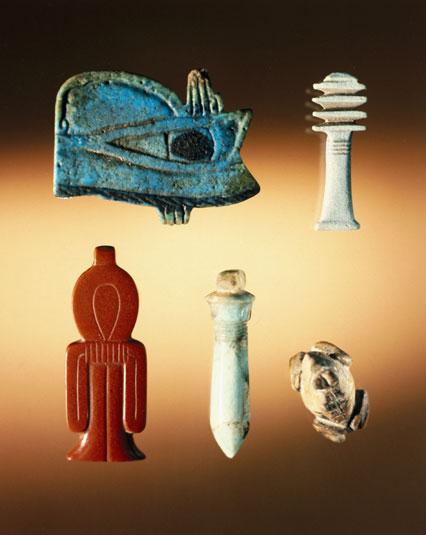 As with most complex, Spiritually co-creative processes - the actual mechanics of how "protection" works - is only loosely understood (by most people). There is a pervasive (and very old school) ?amulet mentality? - stemming from the notion that possessing (or holding, even in your pocket) a certain stone (or trinket) - will necessarily ward off evil. Could it really be that easy? I wish it were so. And there are times, no doubt, when it is (or can be). I just don't think it's (always) so easy - which is why I don't like to give people quick - pat answers. The circumstances, nuances, particulars, and specifics all matter. There is a LOT of grey area in the Spiritual realm - as there is in our own "grey matter" - the human brain and psyche...both are infinitely complex. Also, you can have all the "protection" in the world - but if you stand out on a railroad track , and the train is coming towards you late at night - there's nothing you can do to keep from being mowed down. Tempting fate is a losing prospect. Ultimately, what you're trying to do, is to get on the safe side of reality. Reduce your risk to a minimum. That means "don't trouble Trouble." Stay the hell out of the way, unless you're trying to be a hero, a martyr, or a fool. In any of those cases - you're courting disaster, saying "bring it on" because your cause is just (or you think it is) - and feel the risks are worth taking. In other words - for you - "the ends justify the means." If you're seeking Protection, it's because you want to be safe along the way. You may not actually want to endanger yourself in the first place. You're first line of defense should always be: don't to put yourself into harm's way. Many people (sometimes instead) are looking for "quick fixes," an age old panacea...something easy!

Let me be clear: I don't idolize past traditions - there were (and are) many closed-minded and hurtful superstitions in place - not just issuing from Europe, but from many of the latest and "greatest" belief systems, all around the world. Nobody has - or should claim - to have all the answers. I don't want to say that protective objects don?t exist (like the Kuba nail fetishes of West Africa, and so many more) - but in the case of Crystals - we have the opportunity of gaining a much broader understanding of how this tricky dynamic can work, and be empowered (more than just in awe) of our own capacity to defend ourselves against ?the dark arts.? Not that evil is the only thing we need defense from. Often, our woes are not from malicious malefactors (or supernatural demons), per se. Who we're in need of real protection from - in the day-to-day - are (in the grand scheme of things): ill-willed politicians, imperial and genocidal cultures, climate change, disease and old age. More mundanely (but no less threateningly): vindictive ex?es, negative co-workers, or a car accident can all creep up on you. "The enemy" can be great or small. Or faceless. "Bad luck" - having been dealt a poor set of cards - that's a very common thing we all need protection from. You have to work a bit, to determine exactly what you're trying to be spared, so that you can mount your counter attack, or build your defenses intelligently. 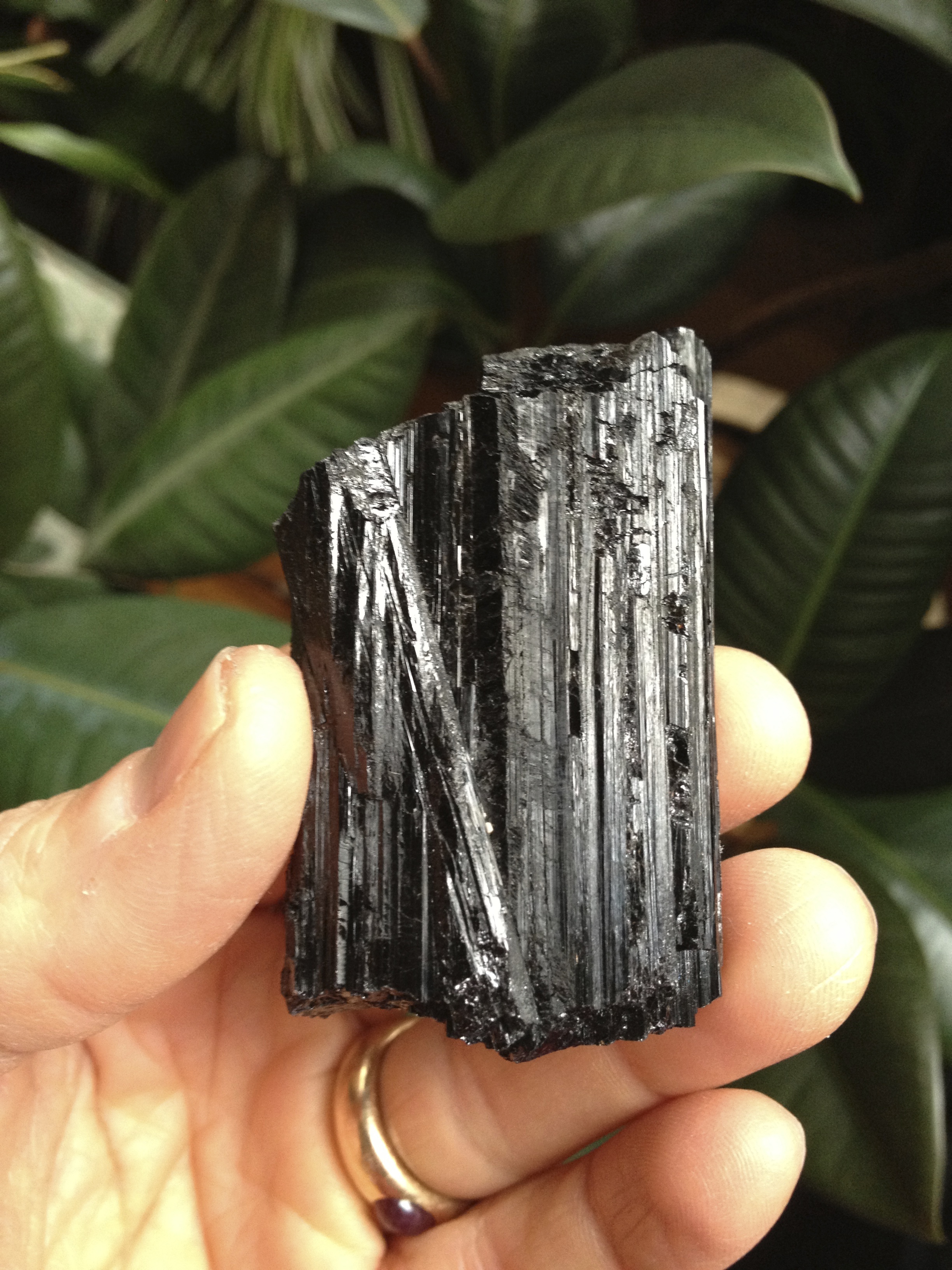 In the "Crystal World," Black Tourmaline is often reached for -reflexively - but why?? What is the mechanism by which its protection is effected? What is the crystal DOING to keep you safe? And why should you choose that one over any other? These are prickly questions - ones we don?t get answers to often - because the purveyors of crystal lore often repeat by rote what's been "handed down" to them, without attempting any?substantive explanation for why one set of assertions should be considered more truthful than any others. Now I don?t expect you to do a science experiment to identify what methods will work best against invisible forces. I don?t know if such a thing is even possible (or desirable). You?re using etheric energy to fight etheric energy...there?s no place for that in the scientific method arena (or vice versa). True to the playing field of "grey area," there are no easy answers, or solutions to the quandary. There is, however, a way of understanding what?s happening - or what needs to happen - which might make sense, and feel like it?s involved in the physical cause-and-effect progression 0f that which you're seeking. Basically, self-defense consists of four parts: avoidance of dangerous situations (stay out of the way); bolstering of internal strength (to gird against attack); the clearing of negative energies (to ensure that that your vibes go unfettered); and going on the offensive (beating back your enemy). Avoidance can be active, and literal - or "passive" - as in stealth, "cloaking," being unseen...shapeshifting. It combines common sense, practical "street savvy," and advanced knowledge of esoteric arts. So I won't be getting into that one right now, from a metaphysical perspective. It's a bit premature, and not really necessary, with all this other advice I'm dishing out. Just mind your P's and Q's, and you should be alright with what I'm presenting here. This is a solid foundation for understanding how Crystals can be used for Protection. 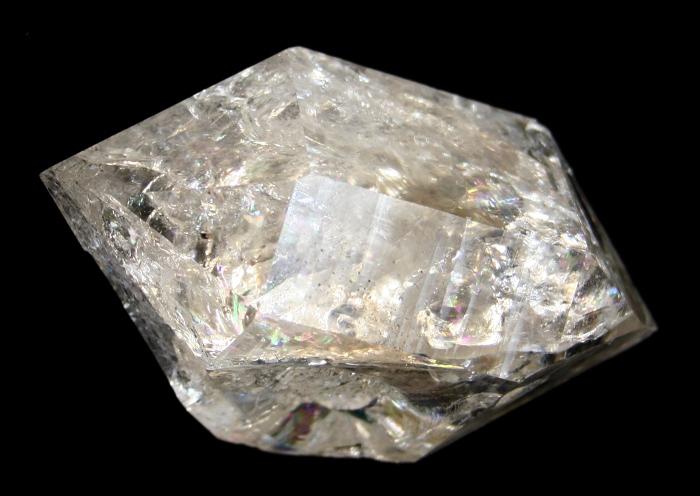 Next. How about bolstering your internal strength? Take a page from our friend, the Herkimer Diamond (a variety of Quartz that forms solo, or in groups, and is generally double terminated). I can't "use" this material for much, like Quartz points, wands, and tabulars. Those all permit the use or projection of energy flow through them. Herkimers hold their own, however: they're pretty much energetically impermeable. Am I repeating this because I've read it somewhere? No! What I'm saying here comes from my own personal experience. You can take it with a grain of salt - "find out" for yourself - and/or trust me, based on my 25 years' experience with Crystals. Herkimers can be rather expensive, for their size, but they're kind of ?unique (though I've seen similar formations coming from Mexico and elsewhere). Dynamically, though, nothing from anywhere else does what a Herkimer Diamond can do. Bigger is indeed better here, and by merely having, or reflecting on it, you can cultivate your own inner resources, "thicken your skin," strengthen your immunity. This is a useful tip, even beyond the topic of Protection...it feeds right into Health and Wellness in general. That's one thing (among many!) that I like about Crystals...they're useful in so many ways, and for so many purposes. The suggestions I make here are by no means the only methods for getting at any given ends. I (and you) might have other stones or techniques (including many that don't even involve Crystals), which may be perfectly useful. But I'm touching on these particular pieces to give you guidelines about how to use these specifically appropriate stones, and how different stones can affect different ends (or sub-priorities) - even if you have one overarching "goal" (in this case, it's Protection). A multi-tiered approach is always better than a one dimensional fix-it. 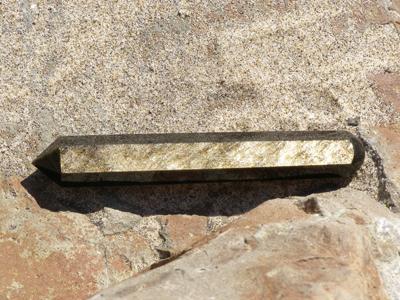 Clearing of negative energies - I use light percussion or sage too (to achieve this) - but in the mineral world, Obsidian (specifically in wand form) is a really good way of shoo'ing away unwanted vibrations. It's like clearing cobwebs. The idea is to scare off "bad spirits" - to make an open, fresh space - for new (and "better") energies to come through. Imagine it's like erasing a blackboard, zeroing out a calculator, or wiping a slate clean. As a result, you can work with "what's left," and build something new in "the vacuum." A corollary to clearing, is the subsequent (or co-incidental) creation and maintenance of Sacred Space. That can be effected through layouts, with energetically neutral objects (or stones), and is an important prerequisite for doing serious energy work. ?You don't want negative vibes slapping back once a person's aura has been opened. It's not fair to them, as they've put their trust in you. Another form of Obsidian - specifically "Apache tears" - is great for this...it's like those circular bubble-generators that keep sharks away. Lastly, there is the notion of actively fighting back opposition (or malevolent intentions). For this, you do need a heavy hitter. It's a bit like fighting fire with fire - the reason people like to have guns - for self defense (or offense towards others). People like to think that their weapon would never "fall into the wrong hands," or be misused by an innocent (like a child). For "2nd amendment'ers," there's also the expectation that their weapon would never be used against them, and that only "good" people's rights are defended by allowing unbridled access to firearms. It's a tricky game that can backfire, and should not to be trifled with. 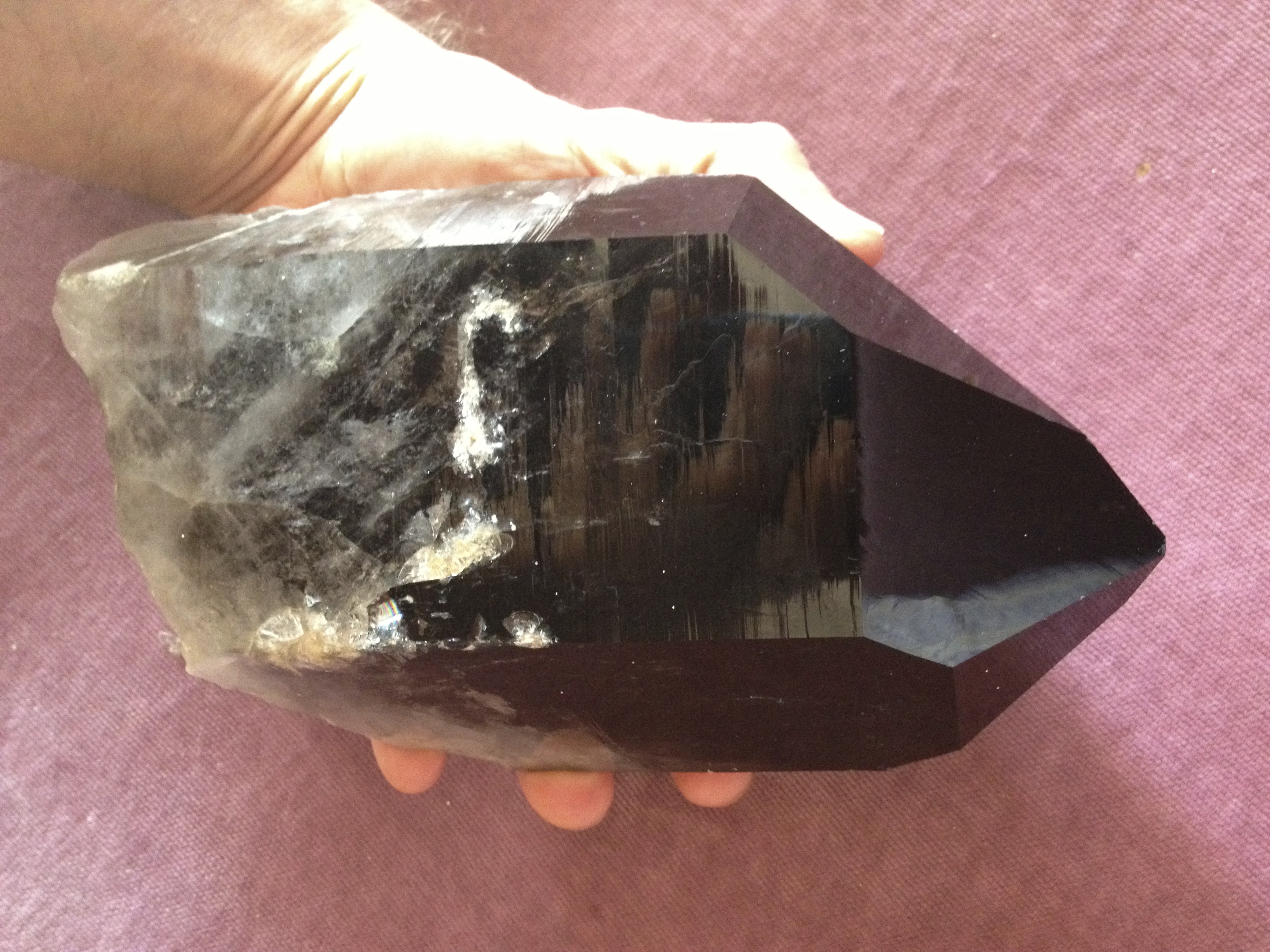 I digress though - but only sort of - because it surprises me to see some folks in the crystal business (usually the non metaphysically-oriented ones) glorifying gun ownership. And yet, here I am, advocating something similar. Evil exists in the world - mostly because of people - it's a force we've generated by our own human hand since "the fall" (or the expulsion from Eden). Even in the natural world - where the construct of malevolence does not apply - predators and other natural forces beset the individual as soon as they're born. We all need tools for defense - and tools are a uniquely human problem solver. Specifically, I present to you this giant, irradiated "generator" point. Notice: it points away from you, and off the page. Usually, I reserve the term "generator" for wide points that stand straight up. In this case, the piece does push out energy spontaneously. And you don't want it pointed at you - or anyone, really - it's more generally for protection, to ward off any evil intentions (which may be out there). I can't tell you the perils I've avoided...which at least, in part...I owe to having this power piece. I realize not everyone has access to something of this magnitude - I haven't seen another since the late 80's - and not all irradiated Quarz will manifest the same qualities (as this one does). However, you may wish to seek out something similar to it. The look may not be the identical. You may find a completely different stone - or some other power object to use - but the function should be comparable. Like an attack dog, it safeguards ?your scene...and that's a very important role (for it) to play. Thus, and in conclusion, it is possible to effect Protection through Crystals. It's not as simple as putting a bandaid on - or one rock in your pocket - my prescriptions are multi-layered. In this, as with any other ambitions you may have, it behooves you to look at the problem from several angles. Then, understanding the intrinsic energies of Crystals, it becomes possible to put together a creative, and 3-dimensional approach to whatever challenges face you. ABOUT THE AUTHOR:? Crystal Concentrics' founder Kyle Russell has been working with Crystals for over 25 years. He is available for individual session work (in person, and long-distance), as well as group instruction: Classes & Meditations. His For-Sale pieces may be seen at www.Facebook.com/PowerStoneCrystals, and you can contact him directly at CrystalConcentrics@gmail.com with any questions you may have.