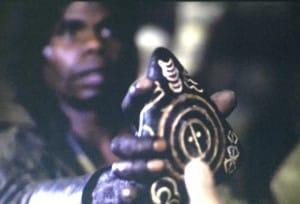 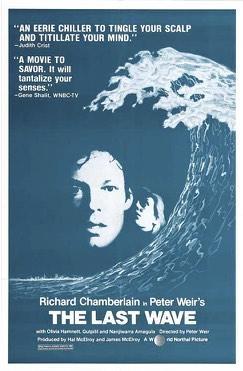 Last night (on the eve of Fathers' Day), I finished watching a movie (with my son). We'd split watching it over two evenings - which I've found is a cool way to really 'get' a movie - rather than watching it all the way through on first?sitting. Anyhow, it's called "the Last Wave."?It was directed by Peter Weir - with Richard Chamberlain, David Gulpilil, and Nandjiwarra Amagula - an intense (and actual!) Aboriginal Tribal leader, who was brought in not only to act, but also for his input?into certain scenes (and dialog for the?film). There are?actual interview quotes from the director himself, in this review,?here (on FlickeringMyth.com?(author Trevor Hogg). There's also a?more recent?"The Last Wave Rewatched - Mysticism, Prophesy, and the End of Times" blog entry?(by The Guardian's Luke Buckmaster, 2014). And I'm sure some good things were?written "back in the day," when the film first came out in 1977 (overseas, and 1979, in the U.S.). I saw it myself, in the '80's (more than 30 years ago!).?I've long wanted to watch it again, and I felt there was something important I wanted to share with my son (and you!), on this occasion...which will become clear as you read on. Most of what you'll find on the web about this film - understandably - will include a synopsis of the film's plot. So I won't dwell on that. Plus, I'm hoping you'll see it yourself -?no spoiler alert - but I will touch on some key elements, which struck me. 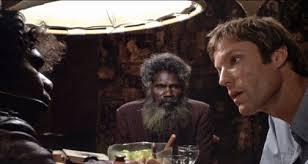 What I'm doing here, is a different type of exploration ...it's not a movie review. The particulars of the story are less significant to me than the underlying importance (and significance) of "The Dreamtime" - a conception of the Australian aborigines - which is common to all "original" cultures: that the "realities" of our waking, conscious experience are impacted by, and occur in the context of a vast,?shadowy, watery, surreal, indeed metaphysical reality (I discuss Metaphysics further, in a few paragraphs). Indeed, for them (the Aboriginals) - and for me(?), if you can believe it - The Dream Time is more real than "reality." It not only reflects, but generates what we see and experience with our other 5 senses. It is, if you will, the unseen dimension...by which all the others are known. If you have "lost your dreams" - as they say in the movie, about white people (and Western "Civilization" in general) - you have nothing...you're out of touch with the intrinsic laws and mechanics of the Universe. Somebody dies in this movie because they "took things" they shouldn't have. Beginning to sound familiar? This is a larger allegory about our Eurocentric culture and all it's wrought (and undone) in this world. Interestingly (per Facebook), Seattle has just voted to replace Columbus Day with Indiginous Peoples Day...an indicator of things moving in a different direction...but let's stick with the status quo for a moment. Often what we see is just the outermost layer of what is ? take this Amethyst cross section for example ? or even the earth?s surface!

During an angry outburst at his stepfather, David Burton (Chamberlain's character) accuses the pastor of explaining away the unexplainable, dismissing this enormously significant phenomenon or context (as the popular versions, or most visible proponents of many mainstream religions tend to)...sweeping The Great Mysteries?under the carpet...dumbing down The Great Truths into?more?easily consumed tidbits (for the sake of being comprehensible to the masses). Playing to the most (or least) common denominator has always been?the way (of even the most ancient of civilizations) - because we have a society to maintain (after all!) - but the outliers: the visionaries...often the artists and mystics of a community, tend to carry the burden of esoteric knowledge...as does Burton (increasingly)...over the course of this movie. The?dominant society?ignores The Dream Time at its own peril.?Having?lost touch with it, they are limited to a more rigid, tangible perception of reality - as evidenced by the opening arguments of the Prosecution (in what becomes a murder case, over?the course of the film) - and it's represented as well by?the lawyer who's actually spent more time working with the Aboriginals (than Burton)...this lawyer?claims there can be no tribal elements left in those who've supposedly assimilated into Sydney's urban culture. 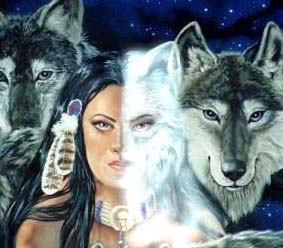 Woman/Wolf - Being is nuanced - multi-dimensional.

This idea - that people can/have to be - only one thing, is very limiting. It's even applied monolithically to "white people" - who are truly a more diverse population than you might think - and were all Pagan before the advent and domination of the great monotheistic religions. Some people scoff at the idea that lighter skinned folk could be Shamans, but who were they before they were Catholics, before the Romans took over Europe, and doesn't the term Caucasian contain (and originate) from?a?point further?Eastward?

Prehistoric ceremony at Stonehenge, long before the "English" embraced(?) Christianity.

What is now, was not always. Take for example, the discipline we call "Metaphysics" - it once included efforts to understand patterns and meaning - not only in the Spiritual world, but also in the physical world - till it was increasingly banished to the fringe...once "proper" Science (with it's exclusive focus on the results of reproducible experimentation) came of age...a mere, few hundred years ago.

Notice the late advent of H. sapiens, and the rather longer reigns of our earlier ancestors.

Our history spans far longer - with our own human lineage dating back 3-5?million years - and the first apes (leading to "us") left the forest?about 10 million years before that.

Modern humans (Homo Sapiens Sapiens) only took current form?- originally alongside the larger brain-capacity Neanderthals (with whom?I have an intrinsic affinity) - 100,000 years ago. 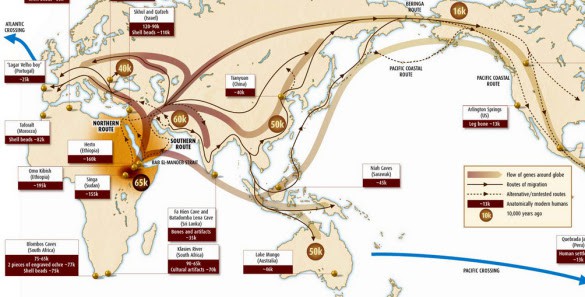 This interesting map shows the genesis - from East Africa - of humans populating the rest of the globe, beginning only 65,000 years ago.

Taking a 25 year (low-end) average life expectancy, or generational period, that's 4,000 generations we've been living through - just as we are now (over the past 100,000 years) - leading up to the present. Only a handful of generations takes us?back to Slavery?-?and even less have been alive since the advent of electricity, lighting, universal plumbing, and cars - never mind computers! The earth's surface - including all the oceans and continents - is a paper thin covering of our planet.

This modern world (and mentality) - which we consider the benchmark of "what is" - is really a thin veneer on a much deeper reality of the entire human (and pre-human) experience. Imagine all the dreams of every being, over the course of all time! Older civilizations (including small bands of isolated peoples) were/are in awe of this history, and appreciated the miracle of their having been brought forth - through the ages - by "the ancestors." A continuity of Natural Law - synthesized into Tribal Law - ruled long before there were secular courts...and it was meant to be respected and not broken...which in the case of the guy who dies early on in the movie,?results in?the meting out the maximum penalty of punishment. Interestingly, this is forgivable - even in Australian Law - if it can be demonstrated that the defendants are Tribal (and not merely "city" people). There is (oddly) a respect for at least one lingering aspect of the "first people's" custom. At one point, the more seasoned lawyer - in Aboriginal matters - chides Burton for his patronizing, high brow (he had actually been a tax and corporate lawyer up until then) idealization of the situation, scoffing at the idea that any Tribal people had survived in the heart of Sydney (which of course, they had). Even the most profound understanding can exist in the least likely milieu. This unlikely candidate to defend the accused murderers (Burton), is also enmeshed in their Dreamtime mythology - an actual "Mulkurul" incarnate - who in the end, finds a death/life mask of himself among the relics of an ancient, lighter complected race that came from the East (the Maya?) and were somehow involved in the foretelling, or even the bringing on of cyclical, cataclysmic tsunamis. Notice again the message here, of how supernatural intercedents both witness and cause actual outcomes. They are among the cast of characters put together to convey a timeless message. It almost doesn't matter who they are, but it matters more that they exist (and what can happen as a result). Nandjiwarra Amagula's character in full regalia - Burton being surprised by him - and the Mayan type mummy and death/life mask.

It's a bit of a clunky jumble of cultures (at the end of the movie) - but hey - isn't that what our "melting pot" is all about? And it's certainly a romp through the Ages - where past, future, and present meld seamlessly - but what better blend could a New Age hipster hope for? Now I don't want to fall into romanticizing original cultures. As wonderful as they are, there are downsides all around. I don't pretend to believe that living 20,000 years ago was a walk in the park. Likewise - though I see the paramount importance of recognizing a Natural Law whose violation has resulted?in our own progressively harsh Judgement today, through climate change (for example) - I take issue with people confusing?their own idiosyncratic, subjective comprehension of The Law with their own fabricated conceptions of the law (and imagining, preposterously, that theirs is the ONLY true interpretation). What seems like a gift, beautiful and serene, can contain hidden invaders with wicked intent.

Herein lies the Trojan Horse of inter-religious animosity, and the subjugation of the individual to unquestioning adherence to some (often selective perspective on) whatever they've embraced as "The Law." We are all entitled to our own experience of The Golden Rule - both fortunately and unfortunately (because people often choose a self-serving interpretation of it) - and as serious as we take it (thinking of it as universally applicable), we still must recognize that our fellow co-habitants of the planet may have equal or opposite views (which they feel equally self-righteous about). The sun will set to rise again - and waves will continue to pound the shore - long after we're gone.

Time and Nature will wash us all away, but that doesn't make our existence - or the beliefs we hold - insignificant. As the Aboriginal (Native American... whichever longer standing culture you want to substitute into this sentence) - their ways and knowledge continue to have worth - so too does the mighty thread of Western "Civilization." It's important to remember that before the Romans, and later, the Roman Catholic Church (note the continuity there) took over Europe, there were myriad languages and Pagan cultures thriving independently (hello: Stonehenge!).

Passing of the Sacred Stone

As the movie shows, it's false to consider even a straight laced English lawyer to be immune from?having a tribal clan in his past (or present!). The Aboriginals know and accept this. Reality - particularly the Dreamtime - supersedes the superficial, and weaves together disparate elements into an impossibly rich and magnificent fabric of "true and complete" Reality - too complex for most people to grasp - and too wild for even the few to harness, completely (if that's even possible). I'd like to think Shamans, Healers, even Doctors, Lawyers, Teachers, and Garbage Men (indeed Mothers, Fathers, and Children of all stripes) - we all have the capacity to comprehend (or at least access) - the Great Mysteries...and each of us - in our own ways - have adapted to and "tamed" them to some degree, to serve our own purposes (and ideally, the betterment of others). In closing - I'd like to thank the community that made "The Last Wave" (and all its variety of messages) possible - and gratefully pass it along, like Life itself, to the next generation...to love and to fear...to struggle with, and to try to make sense of (in whichever, small way). About the Author: Kyle Russell has been working with Crystals for 30 years, and considering Matters of Spirit for far longer (including other lifetimes). He mostly writes about Crystals from the perspective of his modality Crystal Concentrics (his blog & services are listed on this site), which he teaches and uses through Meditations, Classes, Writing, Social Media, and via Individual Sessions. Russell also buys and sells Gems & Minerals through his?http://www.PowerStoneCrystals.com?site and at metaphysical Expos. You can reach him easily at?Kyle@CrystalConcentrics.com.