My Experience at The Alchemy of Stones (Part One): The Setting 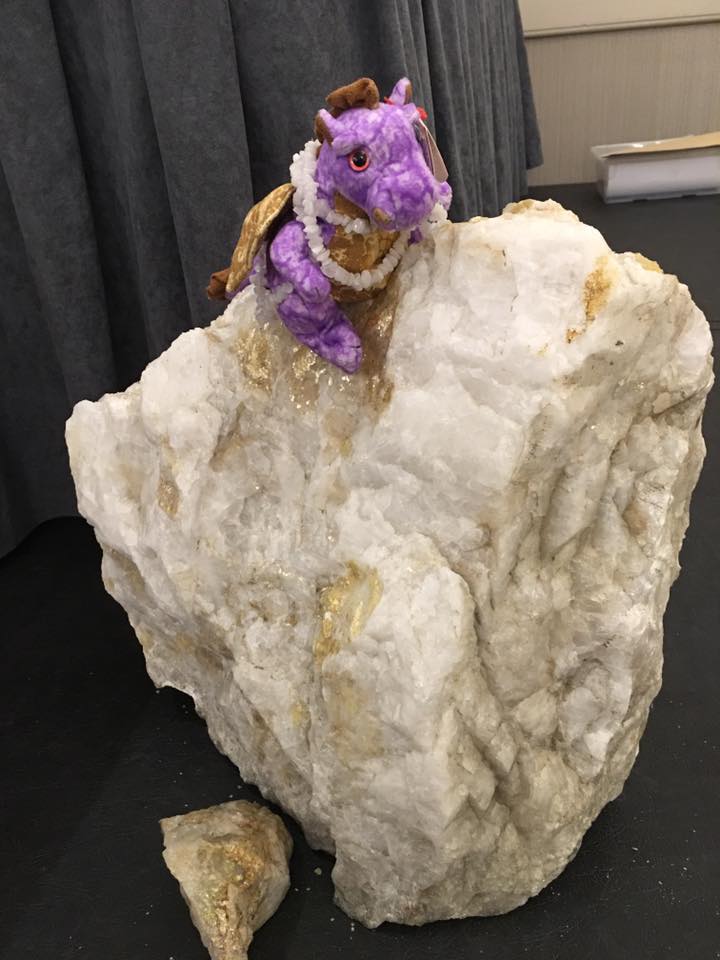 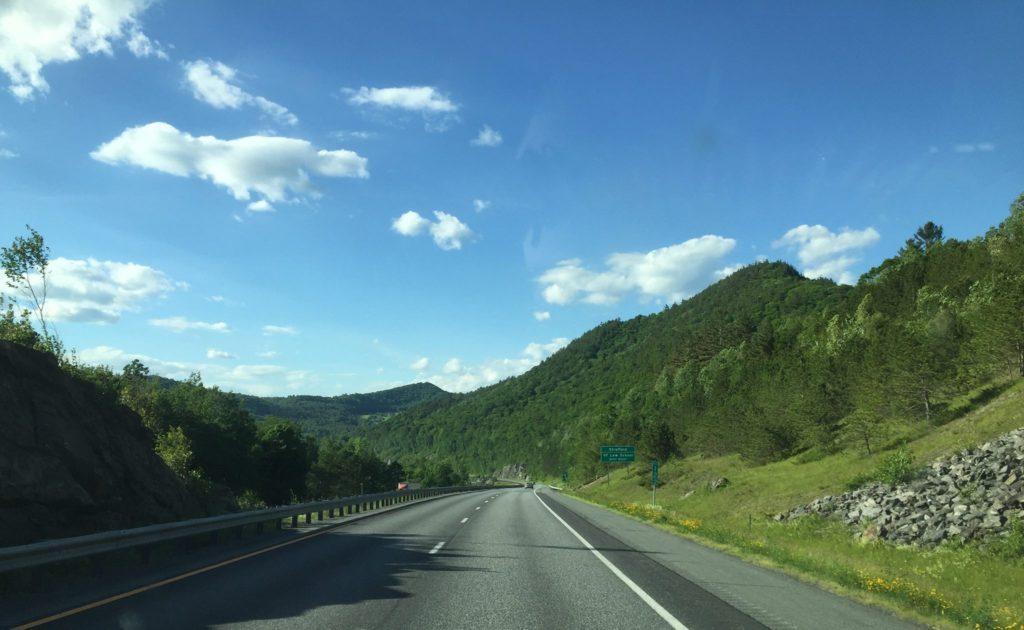 I always welcome opportunities to go to or through Vermont...especially when a wonderful destination is involved!

This weekend - looong weekend: it was three full days, and the morning of a fourth - I traveled to Burlington, VT for Robert Simmons' first intensive workshop in 6 years! I filled 25 pages in my steno book with notes - including quotes, paraphrases, personal observations, automatic writing - and channeled messages. I won't even crack those notes for this Part One of my Experience Review...there's SO much more to say! Not to start with "the bad" - or any kind of negativity - I want to just discuss some of the logistics...give you some context - which is (very much) only part of the picture. If you're really interested, you'll tune in to each of my installments, and get the full picture of what happened, and more specifically, how it happened for me. So to begin with, there was some grumbling about the cost of the food (if you signed up for the recommended meal plan). It was over $30 per meal (including breakfast!) - but when you take into account that an entire hall (and dedicated staff) had to be secured, and the fact that there was an impressive array of vegan, vegetarian, and gluten free options (plus we got to be in community and not have to leave the hotel) - I think it was well worth it! 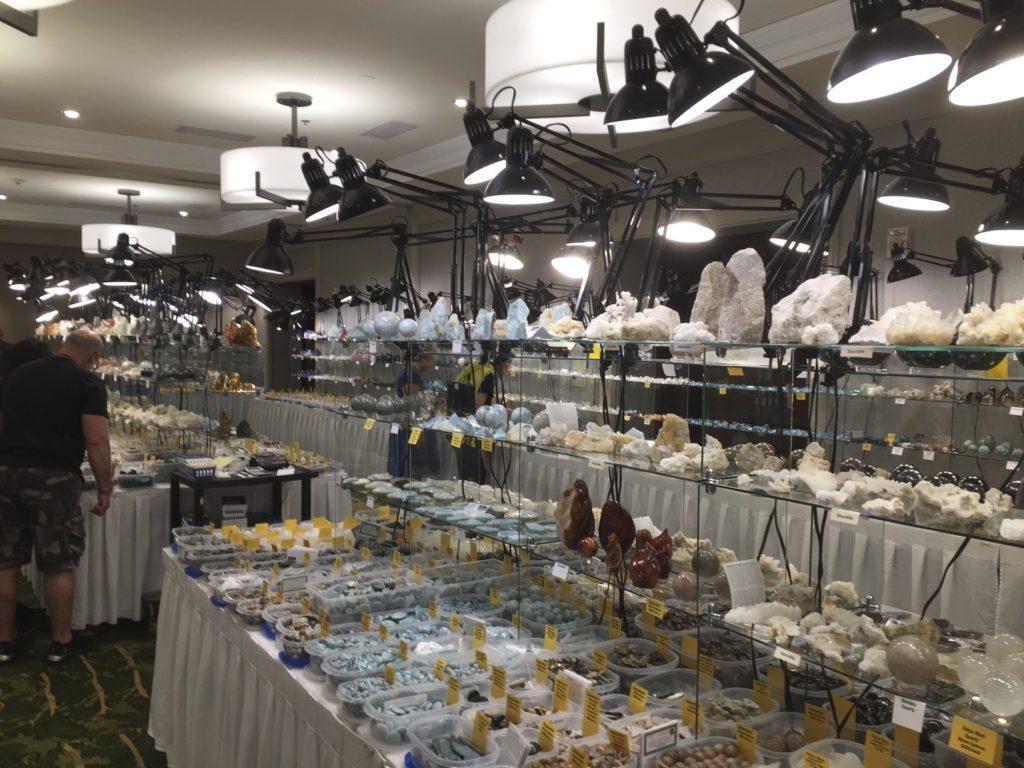 A glimpse of what seemed to be the entire Heaven & Earth inventory, both tumblers & smalls by weight, and display pieces.

Another point of astonishment: prices in the shop were generally high to astronomical, by gem show standards. I myself vowed quickly not to buy a thing. But eventually, even the naysayers took their wallets out.

I began to find items that I felt to be within reach, and appropriately priced. Although many of them were over $400, I took several people over to have a look at the Ametrine selection (among others). Something doesn't have to be under $10 to be reasonably priced. Sometimes you have to pay dearly for something dearly valuable. The selection was quite attractively displayed, the sales staff were numerous and helpful, they let us each start "stashes" with our names on them, which we could come back to (adding or subtracting favored items). Ultimately: you can't expect Crystal Lovers to go home from an event like this empty handed. I know I didn't! A last bone of contention was our inspired but leader's flexible adherence to printed session timing. Sometimes we started as late as 9:15am - instead of the program printed time of 8:30am - for the morning session. Other times, we ended after 10pm (instead of 9:30pm, like we were supposed to). We ended up doing ten (10!) two-to-three hour sectionals daily - morning, afternoon, and evening...it was a bit exhausting. But people were happy...they worked it out...and by all accounts: we (each of us) had a great time. 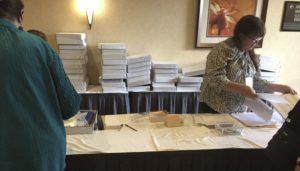 Dedicated Flats of Stones to work with, for the Alchemy of Stones event.

When you make a commitment - financially, and timewise - to come do something (and there's nowhere else to go, or even time, really, to do anything else...no off time to travel the town, or catch up on emails), you get over it all, and simply go with the flow. Of course, it helps when you get a bunch of Crystal Lovers talking about Stones, and deep Metaphysical Truths...what else is there you could possibly want to do?! And then there's the workshop leader - who can make all the difference - he and the team (both his and the hotel's were quite nice and accommodating) prevented it from turning into a grind...which would have made anyone want to leave early. 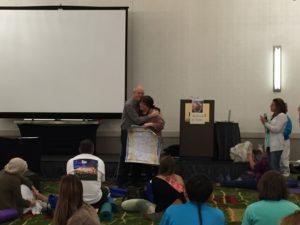 Robert hugging one of his team mates, on receiving a great big birthday card.

I have to credit Robert himself - his warmth, humor (lots of jokes), and the combination of his spacey/airy & watery energy and stated teaching agenda - for keeping it all coherent and enriching (for a variety of personality types...there were 180 registrants!). People came from other countries - the US: TX, CA, OH, NY, VA, AZ...all over - and there was even a contingent of Vermonters and French speaking Canadians, from just over the border. I asked folks: "how did you hear about it?" People were on his mailing list, from having purchased online - it was "a friend of a friend who told me" - basically word of mouth, it seems (as opposed to some sort of marketing juggernaut). 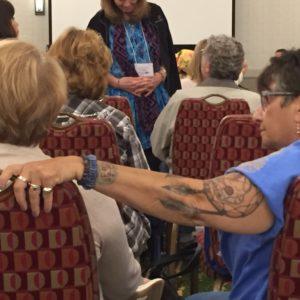 A small sampling of folks mingling in the main lecture hall.

I'm a relatively reserved person (for someone who leads Meditations & Workshops, and deals with the public 10 hours at a time, doing shows) - but I was proud of myself - I made it a point to try to meet everyone (and I almost did). Each day, I sat somewhere different, in hopes of interfacing with a new person for the one-on-one exercises. Once you were settled somewhere, that's pretty much where you stayed for the morning and afternoon sessions. Then, at lunch (breakfast, and dinner too), I chose a different table each time, so I could sit with people I hadn't yet connected with. We found points of commonality - from elder care to jewelry, and of course the stones - I brought some show and tell power pieces from my room each day (which I'd brought from home), and was always sporting some of my best pendants (which always drew some positive attention). 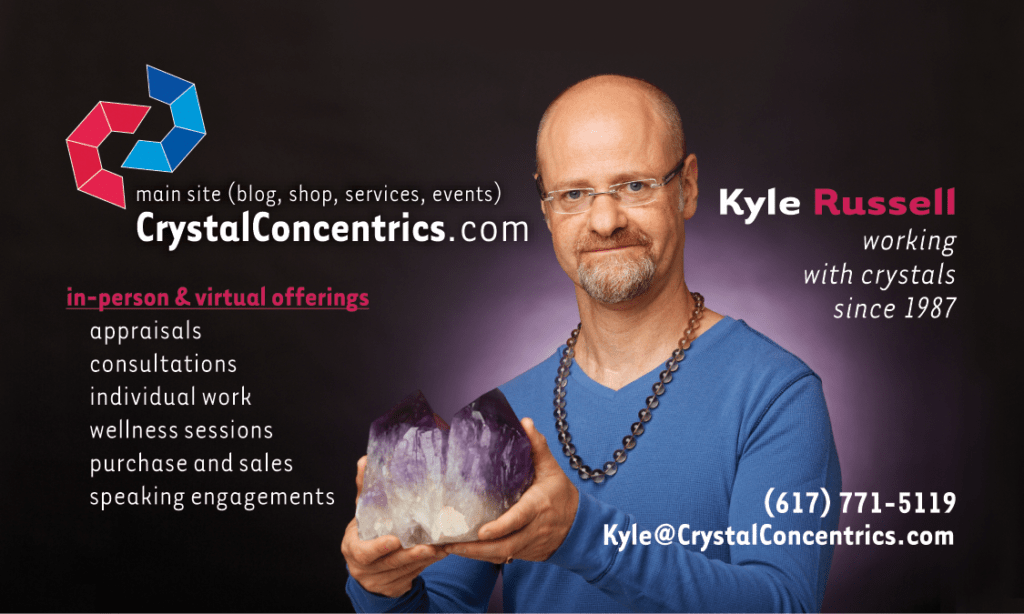 Freshly printed, new business card, received from the printer right to my hotel.

I also handed out cards (which I'd had designed & printed in a rush for this occasion). Yes - I had an agenda of my own - to become known and recognized by this group of far and wide enthusiasts. I say enthusiasts because it didn't seem like there were a lot in the hardcore geological business. I met only a few jewelry makers and vendors. Several attendees had been at the last workshop 6 years ago - but whether new or old followers - one could safely consider them all to be "early adopters" of Simmons' unique blend of Crystal Wisdom. The group didn't seem to be comprised of showy influencers in the Crystal Scene either (such that it is, or isn't). I felt like I was the only explicit representative of another (related) stream of Crystal Wisdom. Some said they'd been "certified" and clearly used Crystals as part of their Healing Arts. There was certainly a strong presence of Reiki practitioners - people had rich and interesting histories - and were every one of them well intentioned, good people. 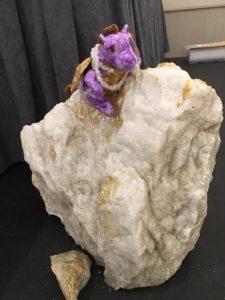 Plush purple dragon atop Azeztulite centerpiece (on the side of the presenters' stage), photo by TK Barley.

One of them told Robert (he shared this with us on the last day) - "oh no - now I have to go back to 'the real world'." He objected (in his gentle way) - asserting that indeed the world we'd been exploring together that weekend, was actually the Real World - and everything "out there" - was not. He made the subtlest reference to American politics of the day (and we could easily extrapolate, with the Orlando massacre having just happened...take that, together with global warming, and all the other insanity afoot...we do live in an unreal, fantastically messed up world!). Robert encouraged us to keep mum about what we'd "done here" - not in a "what happens in Vegas stays in Vegas" kind of way, and certainly not to suggest that we keep secrets or hide our experiences, per se - but because: A) the general public would have trouble understanding; B) we might have trouble expressing what had transpired; and certainly C) the whole picture would be hard to convey with any fair level of accuracy (or without total subjectivity). Yet here I am trying - not because I want to betray anyone's privacy - or attempt to speak for Robert...rather, I am speaking for myself...I genuinely want to share my experience. And I want to capture it, immortalize it for myself (and others), so we can come back and reference it later (before it gets too "old" in my memory). END OF PART ONE (to be continued...)