Why Yoga? I’m a Crystal Guy! 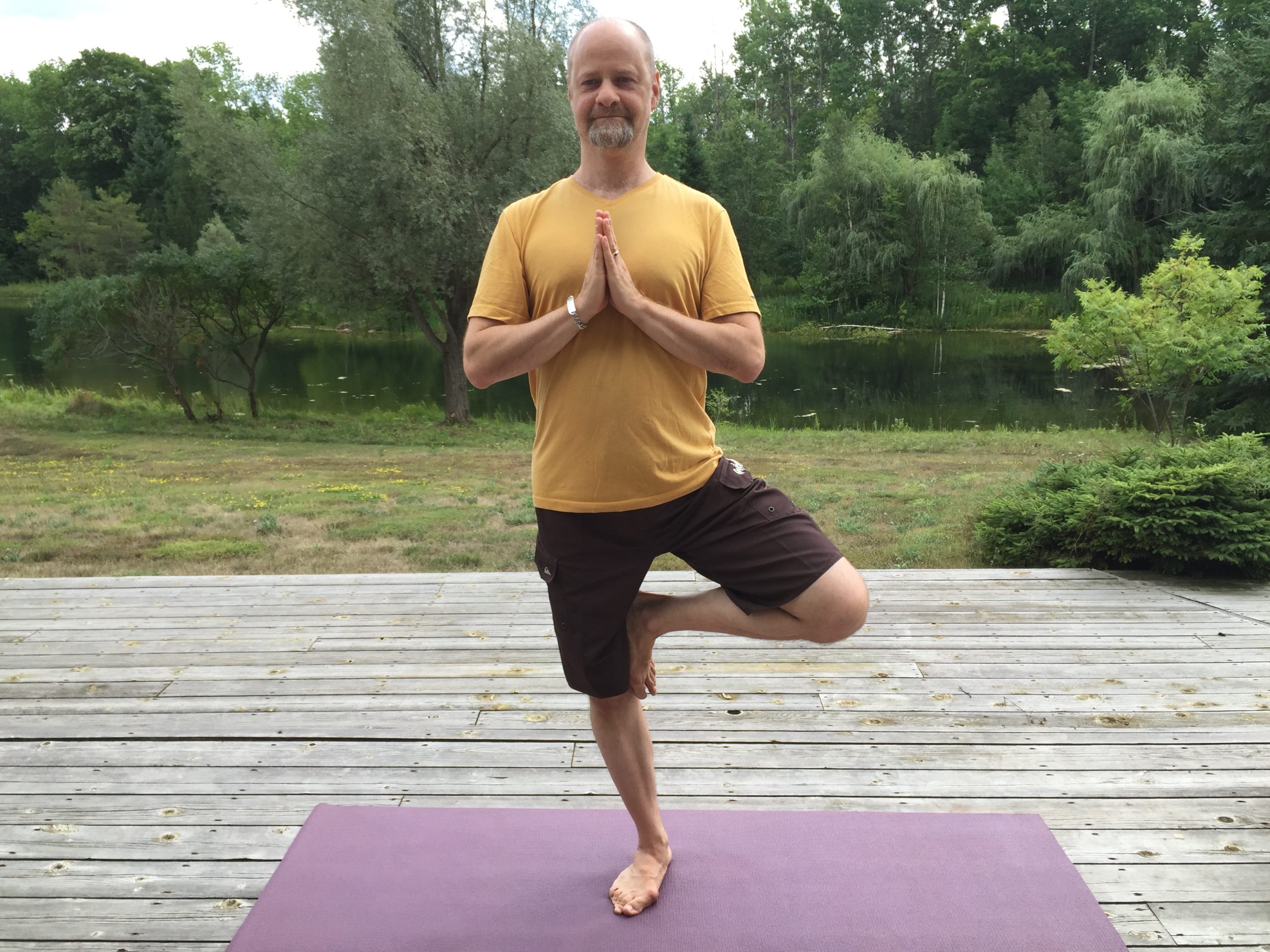 So...every morning, with few exceptions - I devote 10 to 45 minutes to a semi-Yoga routine. I say "semi" because it's not exclusively Yoga, or borne out of a particular tradition. Rather, it's a hybrid, featuring some repetitions (sit-ups, push-ups, and toe-touches for example) and a smattering of "real" poses I've picked up over the years. What makes for a "keeper?" If it feels like it's stretching or strengthening a unique muscle group that feels good to be "worked" on, or "activated" in this way.

But I'm a Crystal Guy! Why should I care about (and indulge) in this physical activity? Can't I meet all my needs through Crystals? Nope. Not exactly. And you have to eat, too - but that's the topic of another blog - 'cause I think what you eat is super important. Basically, your body can't be ignored. To the contrary, it ought to be front and center, because without it...what is there?

I'm an early riser. I don't drink coffee, and often beat my alarm clock to waking. I'm a morning person. When I open my eyes, I'm ready to go. In fact, my wife says that's true even in the night - if something's wrong, I'll respond to my name instantly - and be ready for anything. That doesn't make me a light sleeper, I sleep well. In fact, I'm blessed to pass out within minutes of my head hitting the pillow. 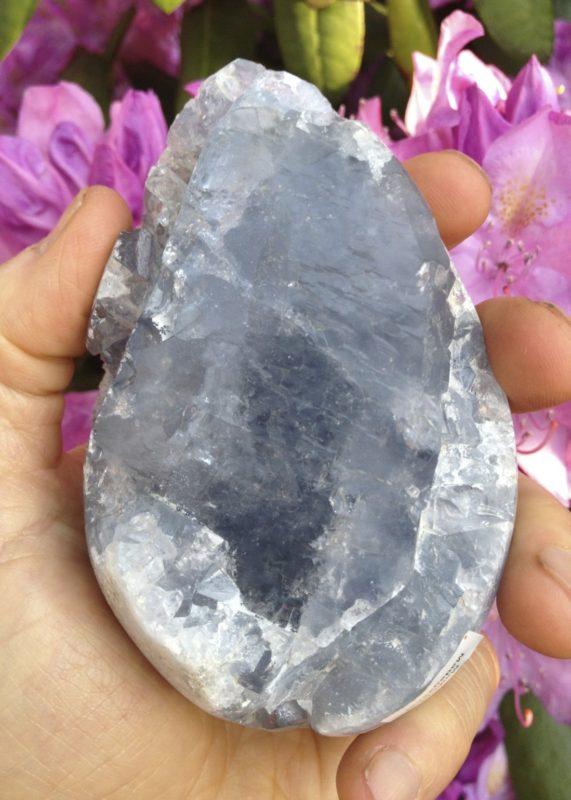 Celestite symbolizes Heavenly Gifts - things you receive through no merit or effort of your own - but just because.

These are things I'm very pleased (and proud) about. Though they're natural blessings - thank you Celestite ("Bearer of Mercies") - I haven't had to work at them, or heal myself of bad habits (in these areas). It's a wonder my sleep patterns weren't messed up from my years on stage (playing music) - late nights followed by early mornings - 17 years ago my son was born (and he was a very early riser indeed...woke me out of many a slumber!).

But I'm getting older, and 8 hours prone can leave my body (anybody's, really) feeling creaky, like it needs to be opened up for the new day. My brain is on 100%, as soon as my feet hit the floor, but rather than getting on the computer (which I'm inclined to do, given how an entrepreneur's work is never done)...I put down the Yoga mat, and get to work, following my internally mapped assortment of poses and repetitions. I add one or two per year, as I'm exposed to them, from others.

I don't take classes - except to get ideas (sometimes) - and I don't follow others' prescriptions (not unlike how I approach Crystals). I'm a self-starter, not needing to be in groups, or at the gym. I know what I need to do, how to do it, and when to do it. I just have to do it! That's the bottom line (for me).

I realize not everyone functions that way. In my wife Nina Manolson's work as a women's health coach, she's found that women (generally) respond best in the context of support and community. It is a "masculine" model - the notion of powering through - and it also suits loners, who've figured out (whether my need or desire) how to survive and get things done on their own. Certainly, single mothers know how to get things done solo - so it's not a gender thing - it's just a stereotypical construct (of how people approach self-improvement). The Masculine has had it's day - even though many self-help Gurus endorse it - and the "feminine" is gaining in proponents and adherents.

I suppose I do take inspiration from my dad, who started following a Canadian Air Force exercise booklet in his 30's, which he pretty much followed up through and into his 70's. My start was a little later, into my 40's - the wear and tear of long hours driving and a heavy bass guitar over my shoulder had taken their toll - I endeavored to set things right by following this self-fangled routine quite religiously.

Then, a year or two ago, my routine was troubled by my kids entering high school. I had to drive them further, and start each day earlier...I lost the precious 45 minutes I needed for myself and my body. I also had used the time to Meditate, originally, but now I'm lucky to get 10 minutes in sometimes - and that's just for basic stretching - before bounding down to breakfast, and hitting the road.

I used to smile too - it would just come on, while I was working out - as my body thanked me, and I thanked my body. An alternative health practitioner told me - after I was recovering from Cancer, during the Summer of my Freshman or Sophomore year in college - that I should force a smile (a few times a day), because there was so much sadness inside (that needed overcoming). It works, pervading your Soul with Joy and Gratitude...antidotes for so much that ails ya. 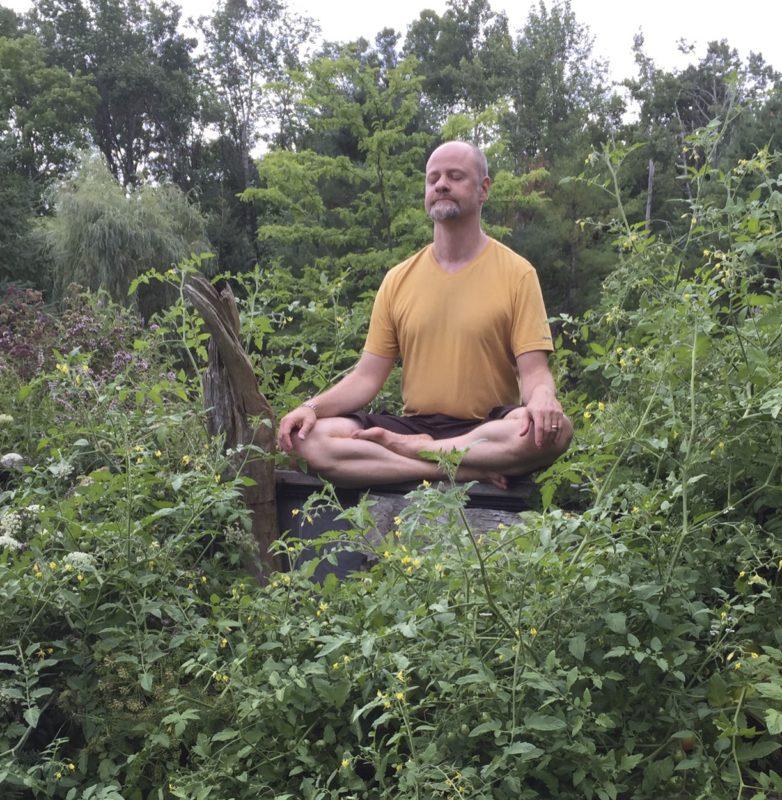 Me Meditating in a sylvan scene, out in the country, north of Toronto.

In my Meditations (solo and group), I often summon cells from the furthest reaches of my person, to turn and face the Consciousness, the Awareness, and the Appreciation of all that they do collectively, to keep me going. They, in their silent multitude, need to be seen (and feel like they're participating in the Greater Good). When I remember this, even as I'm stretching or reaching, I smile naturally - it's not forced at all - and I recognize what a good thing I'm doing...and how good it feels for the body to be seen and included, first thing (in my daily routine).

Basically, the value of my (or anyone's) exercise regime - is that it's a pause and dedication to that physical body, without which nothing else is possible (in this life). That's why - even though I'm a Crystal guy, I treasure other modalities, for their unique contribution to my wellbeing. Indeed, part of the reason I created the Crystal Wisdom and Wellness Conference (rather than just an event focusing exclusively on Stones), is exactly so that everyone attending could partake in my emphasis on this very important priority in my life (in hopes that others could follow suit, or certainly take further solace in their own existing exercise routines).

There is another benefit, or function, to exercise - particularly for those who'd rather lie around and do nothing when they get up - it's Will development, the will to exist and re-exist, or perpetuate one's existence (and Being). Given Entropy Theory, and our movement from Health to Illness...weakening unto Death...you need to actively counteract that dissipation. Forcing yourself to do physical activity - not overdoing it (I actually don't like to sweat) - builds character, and I think, staying power (in this life).

At several points in my life, I was inclined to let go. I'm probably the heaviest I've been - and I'm not a big guy - but there was a time when I was 30 pounds lighter. I figured (at those times) - I'm already in touch with the ethers, and if this is what life is like (not fun) - I want out. But my commitment to stay and be part of this world - getting married and having children - has all been part of a personal movement towards lasting here, in this body.

Basically, right now - I don't think of my morning routine ('cause when else would you have time for it?!) - as optional. Sure, sometimes I have to skip it for lack of a moment. But even in 5-10 minutes, something can (and should) be done to get you (your Mind) and your Body together. Your Longevity and/or Quality of Life will thank you. Mine certainly has. I survived two bouts of Cancer, and I'm still kicking, 33 years later! And I've even worked in a few (unique to the evening) exercises I do automatically, when I get out of the shower at night (and before bed).

Hope all this makes sense, and that you'll join me for my Live and Virtual events, happening freshly, each month. You can see my schedule at this link, and remember, you can always write with Questions to Kyle@CrystalConcentrics.com. I've been working with Crystals since 1987, and lead classes and meditations at my Crystal Sales showroom in Arlington (MA), as well as online. September will see the first Crystal Wisdom and Wellness Conference, here's the Facebook event page.