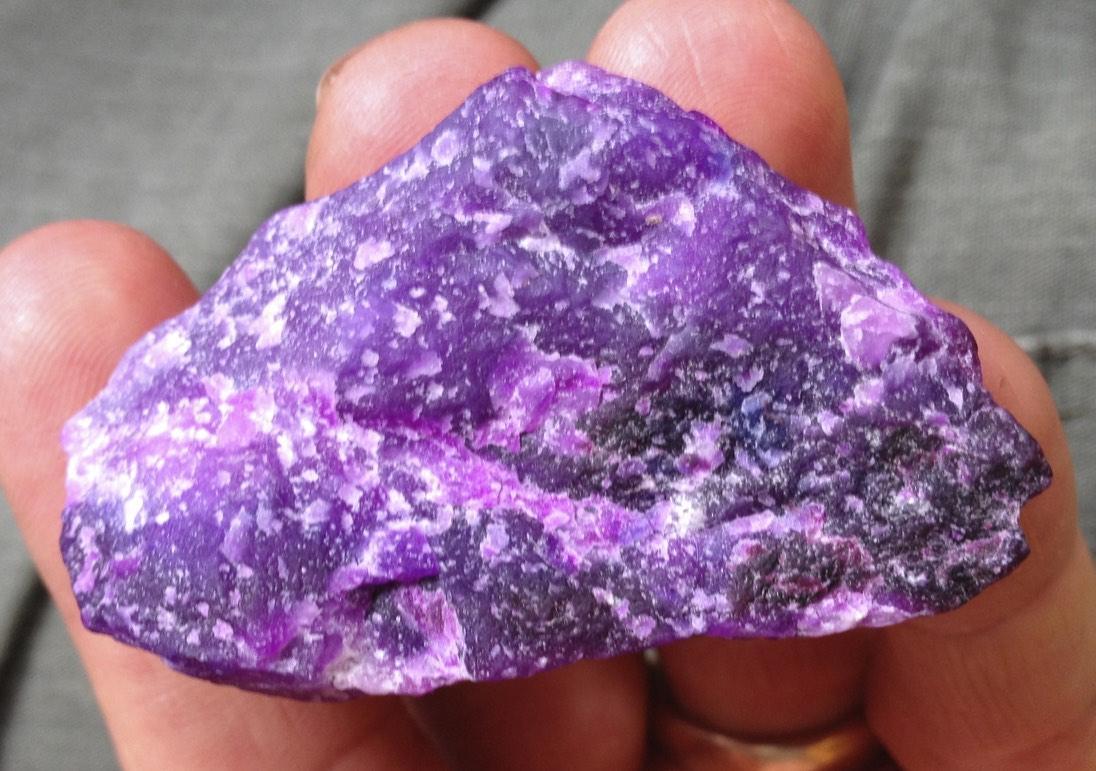 Sugilite is far and away one of my favorite stones – hailing exclusively from South Africa – and mostly mined out in the 70’s & 80’s. There are rumors about current mining or new finds, but they are mostly hearsay. Some stories I’ve heard are: a known mine has been cemented shut for future access; Sugilite is bypassed and discarded in the search for Manganese (which has a larger, industrial application), and “there are Chinese prospectors waiting outside Manganese fields for the occasional chunk a minor may have come across in the dirt.” The Chinese ARE quite fond of Sugilite – the color is exquisite – and Westerners don’t appreciate it as much (so the higher paying Eastern market is scooping up all the good stuff). The stone was apparently “found” by a Japanese gentleman with the last name Sugi – so we should pronounce it with a hard G as they do – but I’ve called it Sujilite (with a soft G) for years. Annoyingly, but understandably, some people even call it Shugalite (since the S in Sugar is pronounced that way). Having become a serious vendor of it, I think I’ll have to conform with the snobby expectation of its proper pronunciation. Now energetically, I used to think of Sugilite as a Source stone, because of its color and high vibration. But I’ve since settled on it being a Voice Energy stone, because of its capacity to tap into and manifest our Hopes and Ambitions – things we want – and are willing to work fork in, in terms of bring our Vision into reality here and now. I’ve called it the “Manifestation Stone” and also featured it on our Greeting Card line, under the title “Good Luck” because it does represent the matching of our wishes with reality, occurring when we do have good luck. Have a look at the Sugilites we have available here on our Online Store: https://crystalconcentrics.com/product-category/stones/sugilite/ Email Kyle@CrystalConcentrics.com with interest in these or other Crystals, whether it’s more you’d like to learn, or whether you’re interested in purchasing them.